Scientists have analyzed the structure of a 66 million-year-old vocal organ belonging to an extinct Antarctic bird.

The discovery of a vocal organ in a bird that lived during the age of dinosaurs suggests that the bird calls we hear today may have originated late in avian evolution, “well after the origin of flight and respiratory innovations,” according to a new paper published in Nature.

The organ, called a syrinx, was found in a fossil of Vegavis iaai, a species of bird that lived during the Cretaceous period. It is analogous to the human voice box, or larynx. Because the syrinx is similarly composed of cartilage, which does not fossilize nearly as well as bone, few fossilized remains of this particular organ have been found, and the ones that have been discovered come from birds that lived more recently than the 66 million-year-old Vegavis.

A thorough search through the fossil record suggested that non-avian dinosaur fossils from the same period, by contrast, lack this sound-producing organ. "This is another important step to figuring out what dinosaurs sounded like as well as giving us insight into the evolution of birds,” says study lead author Julia Clarke, a paleontologist at The University of Texas at Austin Jackson School of Geosciences, in a press release. 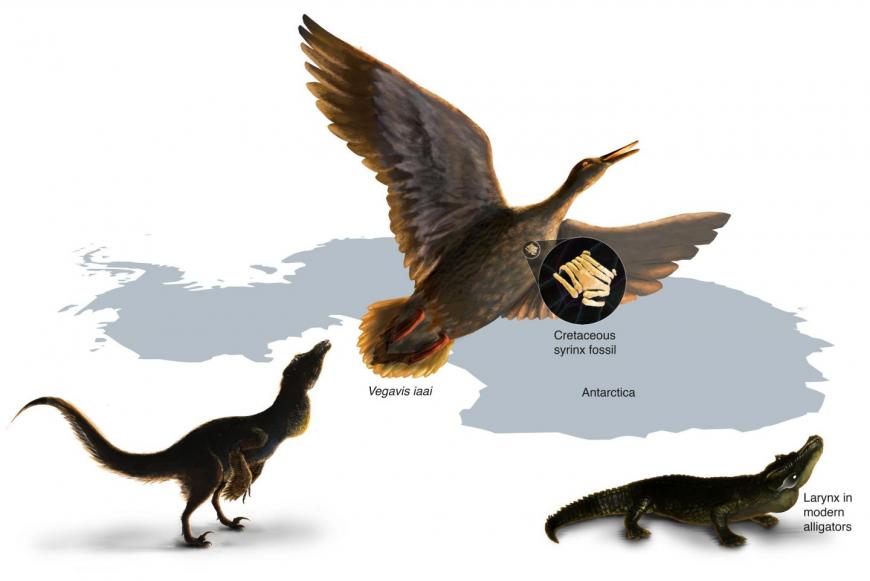 Within dinosaurs there was a transition from a vocal organ present in the larynx (present in crocodiles) to one uniquely developed deep in the chest in birds.

Vegavis is an extinct relative of ducks and geese whose fossilized remains were discovered on Antarctica's Vega Island in 1992. But it was only recently that Clarke noticed the fossil included a syrinx.

By comparing its structure to the same organ in 12 living birds and one specimen from the Eocene, the researchers were able to glean information about the sounds early birds might have made. For instance, the asymmetrical shape is similar to that of living ducks, and the structure suggests the extinct bird could produce honks or whistles.

As the authors explain, understanding how vocal behavior evolved can also shed light on changes in other avian features that have occurred over time, such as increasing brain size.

"The origin of birds is about so much more than the evolution of flight and feathers," Clarke says.