Photo credit: Courtesy of the University of Wisconsin-Madison

An international group of more than 35 scientists discovered the remains of a new human species, Homo naledi and are now trying to figure out where the species fits in the puzzle of human evolution.

An international team of scientists have announced the discovery of a baffling new species of homonin in South Africa that has become the latest addition to humanity’s family tree.

“We have a new species of Homo, with all of its interesting characteristics,” said John Hawks, a paleoanthropologist at the University of Wisconsin-Madison and one of the leaders of a team that retrieved the fossils. “We now have the biggest discovery in Africa for hominins.”

SEE ALSO: The Real "Paleo Diet" Was High in Carbs

The find was reported on September 10, 2015 with the publication of two papers in the open access journal eLife.

With a small head and brain, hunched shoulders, powerful hands and thin limbs, Homo naledi was built for long-distance walking, Hawks said in a statement from the university.

Known as the Dinaledi Chamber, the South African cave where the remains were found is part of the Rising Star system of limestone caves near what is called “The Cradle of Humankind,” a World Heritage Site well known for critical paleoanthropological discoveries of early humans, including the 1947 discovery of 2.3 million-year-old Australopithecus africanus.

The name naledi, meaning “star” in the local South African language Sesotho, pays homage to the location of the discovery.

An expert on early humans, Hawks said the species stood about five feet tall fully grown, was broad chested, walked upright and had a face, including a smile that was probably more human than apelike. Powerful hands imply it was also a climber.

The unprecedented trove of 15 individual hominin remains — including hundreds of well-preserved bones and teeth — represents the largest, most complete set of such remains found to date in Africa, according to the university.

However, the find has produced a number of questions including where exactly the new species falls on the human timeline and whether or not the collection of bodies was part of a deliberate cultural practice.

The unmineralized condition of the bones and the geology of the cave have prevented an accurate dating, Hawks said.

“They could have been there 2 million years ago or 100,000 years ago, possibly coexisting with modern humans,” he said. 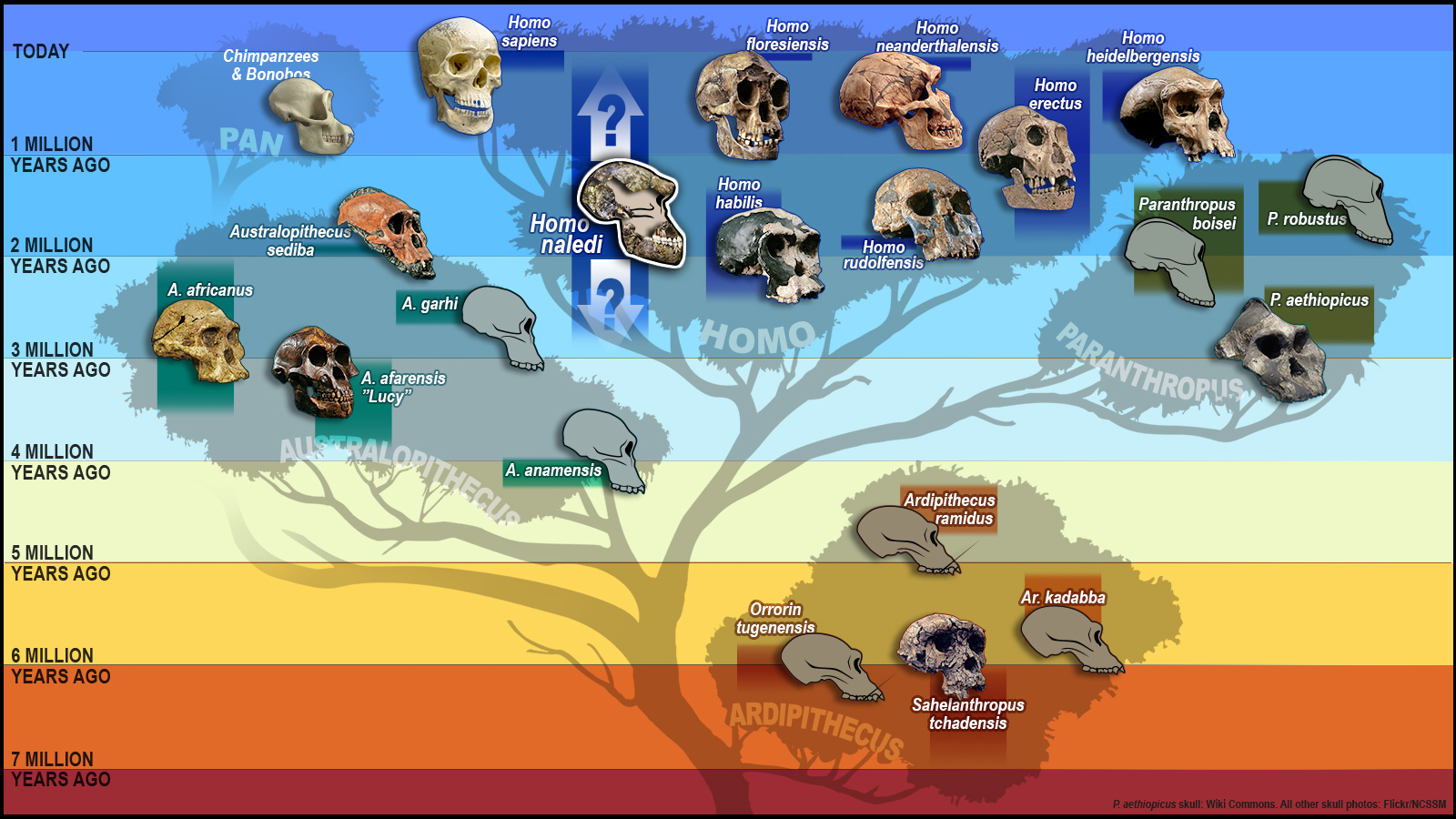 Where Homo naledi falls in the timeline of human evolution is still unclear, but researchers are working to answer that question. (Credit: Courtesy of the University of Wisconsin-Madison)

According to the study, if the fossils are more recent it raises the possibility that a small-brained Homo lived in southern Africa at the same time as larger brained Homo species were evolving.

“This raises many questions,” said Charles Musiba, PhD, an Associate Professor of Anthropology at the University of Colorado Denver and co-author of the study. “How many species of human were there? Were their lines that simply extended outward and then disappeared? Did they co-exist with modern humans? Did they interbreed?”

In addition to identifying an entirely new species in the genus Homo, the collections of fossils, which bear no marks from predators or scavengers, are strong evidence that Homo naledi was deliberately burying its dead, according to Hawks.

“We think it is the first instance of deliberate and ritualized interment,” he said. “The only plausible scenario is they deliberately put bodies in this place.”

According to the university statement, Hawks and his colleagues believe the chamber was something like a repository. The way the bodies were arranged and their completeness suggests they were carried to the cave intact, and if Homo naledi was in fact interring its dead, it would be a stunning discovery — akin to finding similar behavior in chimpanzees.

“It would be that surprising,” Hawks said. “The bodies were not intentionally covered and we’re not talking about a religious ceremony, but something that was repeated and repeated in the same place. They clearly learned to do this and did it as a group over time. That’s cultural. Only humans and close relatives like Neanderthals do anything like this.”