Black holes are one of the most fascinating phenomena in the universe, and a topic of rich debate. Recently, Stephen Hawking proposed a new theory that may solve one of the puzzles about black holes.

Stars, like people, can die in a variety of ways. Once they run out of fuel for nuclear fusion, the smaller ones, like our sun, quietly shrink into white dwarfs that are faint echoes of their former selves. But some stars keep growing until they can no longer sustain their own bulk. They explode in a supernova, engulfing the entire surrounding galaxy in a flare of light. After this spectacular display, the most massive stars leave behind a black hole.

It seems impossible that stars, the sources of light and energy that sustain all life, can invert into objects of such absolute darkness. And for many years, physicists assumed that black holes, while possible under the theory of general relativity, would remain squarely in the realm of fantasy.

But these mysterious objects returned to the academic forefront in the 1960s, as theorists began finding more solutions to explain their properties. Combined with advances in imaging technology, these new solutions allowed astronomers to indirectly detect black holes using their effect on surrounding matter. As it turns out, black holes are remarkably common throughout the cosmos; almost every galaxy has one lurking at its center, including ours.

So what makes a black hole black? It still has the same mass from its former life as a star, but the mass has entirely collapsed into a singularity — a volumeless point where spacetime has no significance, like a puncture in the fabric of the universe. Within a surrounding sphere of a certain size, any particle can only travel toward the singularity.

That sphere is bounded by the event horizon, through which matter and light are inexorably sucked inward. Events that happen at the horizon are hidden from outside observers because of an effect called gravitational time dilation. Under general relativity, the gravitational effect of matter can warp the shape of space and time. Lightwaves traveling on those warped pathways get stretched out and slowed down into lower, red frequencies, or “redshifted.” Eventually the light becomes too dim for outside observers to perceive it.

Therefore, the blackness of the black hole results from those lost visuals. If, for example, a blue-footed booby finds itself falling into a black hole, we will see it slow down as it nears the event horizon. The light that forms its image is redshifted before it can reach our eyes. By the time the booby appears to freeze right at the edge of the event horizon, its image has completely disappeared. 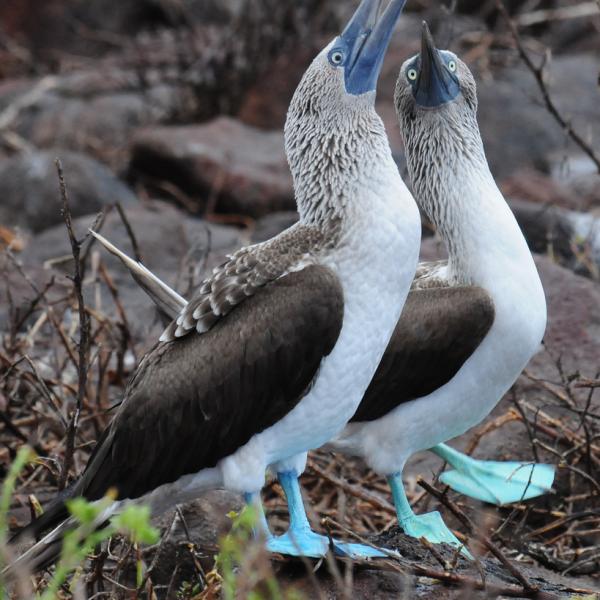 A blue-footed booby, because if we’re going to conduct a thought-experiment, we might as well have fun with it. Credit: Vince Smith/Flickr (CC BY 2.0)

So, that explains why we lose sight of the blue footed booby as he falls through that rip in the space-time continuum. As for what actually happens to our intrepid booby? He’s most likely out of luck. Most theorists believe that at some point during his fall, gravity will “spaghettify” him (an actual physical term), stretching his form into long, noodly shapes. Once he reaches the singularity, he will collapse into infinite density. Still, others speculate that the singularity may not spell certain death — after all, if black holes break down the laws of space and time, who’s to say that they can’t connect to another universe where those laws are written in a different language?

Obviously, physicists have yet to solve many mysteries about black holes. One particularly thorny problem is called the “information paradox.” In 1974, Stephen Hawking proposed that black holes can actually emit radiation. Eventually, a black hole could lose so much “Hawking radiation” that it entirely disappears. But then what would happen to the quantum mechanical information belonging to everything it had consumed? While general relativity predicts the destruction of that information, quantum mechanics demands that information must be eternal. This paradox has stumped physicists for decades.

Hawking has astounded the field of black hole physics once again by suggesting a solution to the paradox. In a conference at Stockholm’s KTH Royal Institute of Technology on August 25, he explained that the information may be stored within the event horizon, not inside the black hole. As particles fall through, they leave behind impressions called “super-translations,” like two-dimensional holograms. These super-translations transfer to the particles of Hawking radiation so that the information is preserved and returned, albeit in a jumbled fashion.

The jury’s still out on whether Hawking’s new theory will truly solve the information paradox. Black holes make such an engaging sphere of study because they create an intersection between two fundamentally incompatible theories: quantum mechanics, which operates on the subatomic level, and general relativity, which works with gravity on a universal scale. It is likely that this paradox, as well as the many other mysteries posed by black holes and their cryptic kin, will continue to enliven the eternal search for a true “theory of everything.”