Trained dogs are around the fMRI scanner. This material relates to a paper that appeared in the Sept. 2, 2016, issue of Science, published by AAAS. The paper, by A. Andics at Eötvös Loránd University in Budapest, Hungary, and colleagues was titled, "Neural mechanisms for lexical processing in dogs."
Photo credit: Enikő Kubinyi

News releases about the fight against Zika, a happy sex life, and dogs were among 2016's most popular on EurekAlert!, a science news service operated by the American Association for the Advancement of Science (AAAS). For the first time, an infographic made its way to the top five most-shared list.

The most popular news release of 2016, titled "Canadian innovation for killing mosquito eggs could help Zika fight," received 414,825 page views between 16 December 2015 and 15 December 2016. It describes a low-cost and environmentally friendly approach to killing eggs of mosquitoes that spread diseases like dengue and Zika.

A second Canadian release, "University of Toronto study reveals secret to a happy sex life" took the 4th spot with 205,989 views. It describes how "sexpectations" -- the belief that sexual satisfaction either takes hard work or comes from being true soulmates with a partner -- can make or break a relationship.

For the first time, news releases about animal biology outnumbered those about human health with the most spots -- five -- in the top 10.

Our fascination with man's best friend catapulted two releases into 2nd and 7th places. A press summary from the journal Science about dogs' ability to understand vocabulary and intonation in human speech received 194,013 views.

A Cell Press news release, entitled "Your dog remembers what you did," earned 299,194 views for reminding dog owners that "your dogs are paying attention, and they'll remember." This news release was also the second-most shared release in 2016 via AddThis, with 1,600 shares and more than 1,000 social clicks on multiple platforms including Twitter, e-mail, and Facebook.

Imagine having to rip your own skin apart just to open your mouth to eat. Hydra, a tiny freshwater animal, does just that. A second Cell Press news release illustrating this process for the first time -- complete with video -- was the 3rd most popular release in 2016 with 286,475 views. (This is also the second year in a row that Cell Press occupied two spots on the annual Trending News List).

Bucking the trend from previous years, where health-related news dominated the EurekAlert! Trending News List, this year saw five releases about animal biology and four about human health occupying the top nine spots. A WiFi-related release was the lone entry from the tech arena.

Other entries in the 2016 Trending News List include releases about the relationship between wheat and chronic conditions like multiple sclerosis, asthma and rheumatoid arthritis, how coffee may help ward off dementia in some women, salmon hatcheries causing rapid genetic changes, and advances in WiFi technology.

The 10 most popular news releases on EurekAlert! in 2016 are:

7. Dogs understand both vocabulary and intonation of human speech (194,013)
American Association for the Advancement of Science; Science

8. For women, caffeine could be ally in warding off dementia (183,900)
Oxford University Press USA; Journals of Gerontology Series A: Biological Sciences and Medical Sciences

10. WiFi capacity doubled at less than half the size (130,672)
Columbia University School of Engineering and Applied Science; Nature Communications

Three of the five most-shared news releases in 2016 are also among the most-read. The top spot went to the release suggesting a link between a protein in wheat and chronic conditionssuch as asthma, rheumatoid arthritis, and multiple sclerosis, with upwards of 1,700 shares and 6,100 social clicks. The 5th most-shared release, from The Lancet, describes a new stem cell transplantation method that may halt MS symptoms.

The two dog-related news releases on the Trending List also made it to the most-shared list, occupying the 2nd and 4th spots.

For the first time, an infographic from the multimedia archive emerged as one of the most-shared items of the year. A 2015 map showing that lice in 25 U.S. states are resistant to common treatments earned 3rd place with more than 1,100 shares and 1,000 social clicks. The related study had been presented at the 250th National Meeting & Exposition of the American Chemical Society. 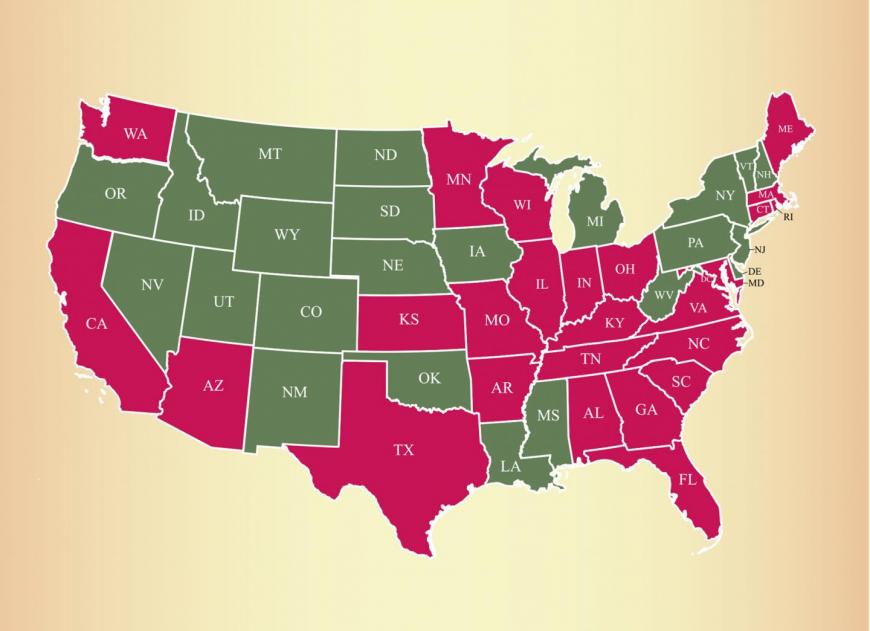 IMAGE: Lice populations in the states in pink have developed a high level of resistance to some of the most common treatments. CREDIT: KYONG YOON, PH.D.

The five most-shared items on EurekAlert! in 2016 are:

Social media sharing via AddThis in 2016 continued an upward trend with a total of 344,400 news-release shares over 2015's 340,233. Facebook, Twitter, and e-mail remained the preferred sharing platforms, while LinkedIn and Reddit made up a smaller but significant presence.

This article has been republished from materials provided by EurekAlert!. Note: material may have been edited for length and content. For further information, please contact the cited source.