Newborn panda cubs are a miracle, but also exceptionally difficult to rear.

The world erupted into squeals of delight when Mei Xiang, a giant panda at the Smithsonian Institute’s National Zoo, gave birth to twin cubs on August 22. And it was with an equal amount of sorrow that conservators and panda-lovers alike discovered one of the twins would not make it past four days.

Raising any newborn animal is tough, and panda cubs are particularly helpless. They’re born as small as a stick of butter, completely hairless, and unable to see or move. The situation is more complicated when twins are born because a mother can only care for one infant at a time.

For the first few days, the zookeepers continually switched the two infects — every four hours, the team placed the unattended cub on the floor near Mei Xiang. When she heard its cries, she would put down the one she had been cradling and shifted her energies to the second one. That’s when a team member would whisk away the abandoned cub to an incubator. 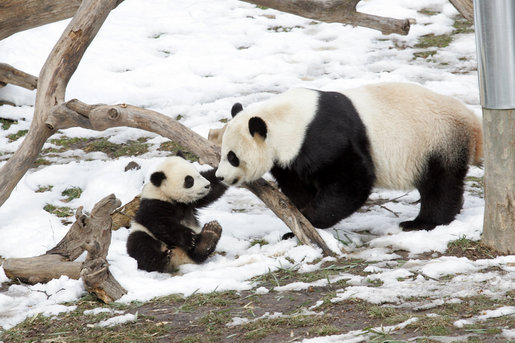 Mei Xiang, the radiant mother, with her baby Tai Shan in 2006 (Shealah Craighead)

But two days in, Mei Xiang was overtaxed and confused. Late in the night of August 24, she would not relinquish the larger cub, even when presented with its twin. Wild panda mothers are usually inclined to only care for the stronger of their twins, leaving the other one to fend for itself — just as cats and dogs choose not to waste their time on the runt of the litter. Unfortunately, the smaller cub suffered from this prolonged separation. It failed to gain weight, struggled to breath, and finally died at 2pm on August 26.

Based on a necropsy, the cub died from aspiration pneumonia. This is a well-known risk from bottle feeding, but the zookeepers had no alternative after Mei Xiang stopped caring for the cub. As a result, it regurgitated some of its food and breathed it into its lungs, which caused infection. The veterinarians began antibiotic treatment, but to no avail. 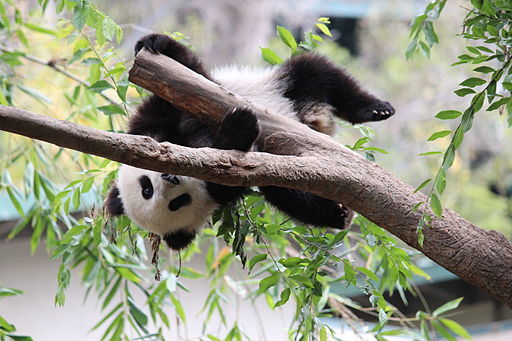 Thankfully, the other cub (now named Bei Bei) is not only surviving, but thriving. Thanks to a genetic test zookeepers were able to determine Bei Bei’s sex (male) and trace Bei Bei’s paternity to Tian Tian, a male at the National Zoo. Mei Xiang’s pregnancy had resulted from artificial insemination using a mixture of sperm from both Tian Tian and Hui Hui, another male panda from China Conservation and Research Center for the Giant Panda.

Since Tian Tian is more closely related to the mother, Hui Hui would have been the preferred father for Bei Bei. One of the struggles with conserving an endangered species is maintaining genetic diversity. As a population shrinks, the gene pool tends to become homogenized, which leads to cubs that are inbred and unhealthy. There are currently only 1,864 pandas living in the wild, with 395 kept in breeding centers and zoos.

Giant pandas are notoriously difficult to breed in captivity, for several reasons. Female pandas are only fertile for two days per year, and during that brief period a pair may have trouble getting the deed done. Despite the panda team’s best efforts to get Mei Xiang and Tian Tian in the mood, the pair just didn’t seem interested during her ovulation period in April. With Mei Xiang’s biological clock ticking, the zoo resorted to artificial insemination.

But there was no way to check whether the procedure succeeded — the embryos are so tiny that they’re hard to see in an ultrasound, and they may not properly implant in the uterine wall for several weeks. Zookeepers usually keep an eye out for pregnancy-related behavior in the mother, like building nests, sleeping more, and eating less, but some panda females are so excited about motherhood that they fake these behaviors without being pregnant. These “pseudo-pregnancies” can even increase levels of the hormone progesterone in the panda’s urine, which can further confuse the attendant veterinarians.

The panda team couldn’t detect a fetus via ultrasound until August 19, three days before the birth. At that point, a successful panda birth still remained up in the air because pandas can often re-absorb the fetus late in the gestation period, or experience a miscarriage.

Now that Mei Xiang can focus her energies on her surviving cub, Bei Bei is well on his way to making it to the 100 day mark. Keep updated as he grows stronger and ever more lovable.