In a forest in Karnataka, India, researchers spotted a particularly odd-looking spider in a shrub about 4 feet (1.2 meters) off the ground.

In a new study, the authors describe the critter’s grayish-brown colored body, which is spotted with darker brown dots and camouflaged with white and light yellow hairs, blending in with the surrounding foliage. Perhaps most striking is the spider’s unique body shape — it resembles a crooked witch hat.

While other forest creatures might mistake the spider for a dried up leaf, the arachnologists, who also happen to be huge Harry Potter fans, couldn’t help but see a striking resemblance to the Hogwarts Sorting Hat.

After giving it some thought, the team decided to name the new spider species after the co-founder of Hogwarts and original owner of the Sorting Hat, revered wizard Godric Gryffindor. The spider’s official name is Eriovixia gryffindori.

Writing in the study, which has been published in the Indian Journal of Arachnology, the researchers describe their peculiar name choice as "An ode from the authors, for magic lost, and found, in an effort to draw attention to the fascinating, but oft overlooked world of invertebrates, and their secret lives.”

J.K. Rowling was pleased about the news, tweeting that she was “truly honoured,” and congratulating the researchers on discovering another “Fantastic Beast.” 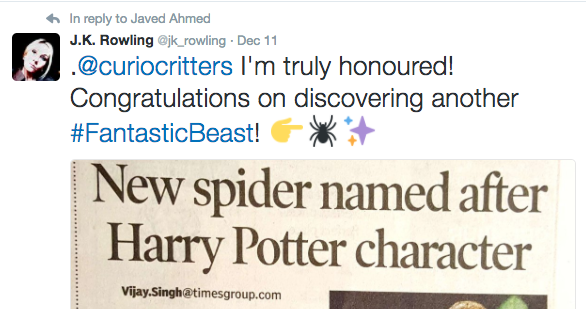